To Paris a couple of weeks ago – and my latest alma mater, the University of London Institute in Paris (ULIP) – for the launch of Francosphères, a new journal with a mission “to define and question the presence of French language and culture across frontiers and borders, as defined by the Franco postcolonial presence, contact with French culture, and the ‘France of the mind’.”

Faculty, staff, post-grads and distinguished visiting academics gathered beneath the glittering chandeliers in a first-floor salon at ULIP’s Paris HQ (shared with the British Council) on Rue de Constantine in the 7th arrondissement, overlooking what is probably the epicentre of the France of most people’s minds – the golden dome over Napoleon’s tomb at the Invalides, and the Eiffel Tower gleaming and twinkling in the gathering dusk. Images from the pages of the journal were displayed  on a wall-mounted screen: photographs of graffiti tags from the Paris banlieue formed a slideshow next to a huge, gilt-edged overmantel mirror reflecting the aforementioned chandeliers ad infinitum (when francospheres collide?).

ULIP’s Dean, Professor Andrew Hussey OBE, delivered a passionate, personal address staking the journal’s claim to new terrain in the august field of French Studies, while guest speakers and contributors expanded on the significance of the term “francosphere” as an alternative to existing coinages like “French and Francophone Studies” or “France and the French-speaking world”, with their inevitable, unacceptable whiff of hierarchy, and the risk of donnish quibbles (in the latter case) over the logical (mis)implication that France is not, then, a French-speaking country…

As a jobbing commercial and literary translator, tearing myself away from looming deadlines to attend events like this can be (a little) like retreating shell-shocked from the trenches of the Great War to an evening at the Cabaret Voltaire. Except that the francosphere has been a noticeable presence in my commercial work, too, just recently. Commissions have included translating a new critical study and anthology extracts from the work of Martinique writer Patrick Chamoiseau (whose novel Texaco features in issue 1 of Francosphères, coincidentally enough). Chamoiseau’s novels, pamphlets, memoirs – even a brand-new bandé dessinée album – assert a distinctive French Caribbean Creole identity, full of literary echoes that seem calculated to circumvent mainland French culture altogether and establish connections with “universal” writers like Hemingway, Calvino or Defoe. Professor Hussey’s definition of the non-geographical francosphere, extending “across frontiers and borders,” also struck chords: one of my favourite French authors, Gabrielle Wittkop, spent almost all her adult life in exile in Germany, where she has a large following in translation. Her works are largely set outside France, in India, the Far East, Rome, and Venice (notably Sérènissime Assassinat, a Venetian murder mystery, currently seeking a US publisher in my translation thanks to a French Voices award). My latest fiction translation is a dark, atmospheric crime novel set in the Finnmark wilderness of north Norway, but written by a Frenchman: Olivier Truc has been Le Monde’s Copenhagen correspondent since the mid-90s and is, as it turns out, an accomplished new voice in crime fiction, currently seeking an English publisher at Frankfurt.

One of my favourite French children’s books is Georges Lebanc (L’école des loisirs, 2001), by author and illustrator Claude Ponti.  The story includes a wonderful evocation of the geographical scope of the francosphere, and of the power of shared language and culture (through cross-fertilisation and translation) to forge unexpected connections.

Two children, Ysaline and Nanik, share the same Teddy Bear (Nounours Zoreille – “Teddy Big-Ears”), but they don’t know it because they live thousands of kilometres apart, in Bastia on the “French” Mediterranean island of Corsica, and Ikaluit, in north-eastern Canada. When they grow up, each sets out on a world tour, driven “by a mysterious force they are powerless to resist.” Ysaline takes a wonderful, culturally and linguistically-crossed route from Bastia to the north-west coast of Africa, and on to Saint-Pierre et Miquelon off the coast of north-east Canada, followed by “Ile de Quatreure, Terre de Feu, Ile Sandwich du sud, Terre Adélie, Antananarivo, Ile de Kiribati […] Ile Féroé” and finally Paris where, sitting on the book’s eponymous hero George “the Park” Bench, she meets Nanik, who has travelled around the world the other way, via Belo Horizonte, Easter Island, St Helena, Abidjan, Kalgoorlie and Abu Dhabi.

“And the great mystery of their lives,” says Ponti, “is that they had loved one another forever, without knowing it.” 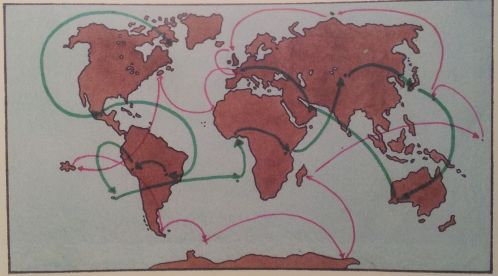